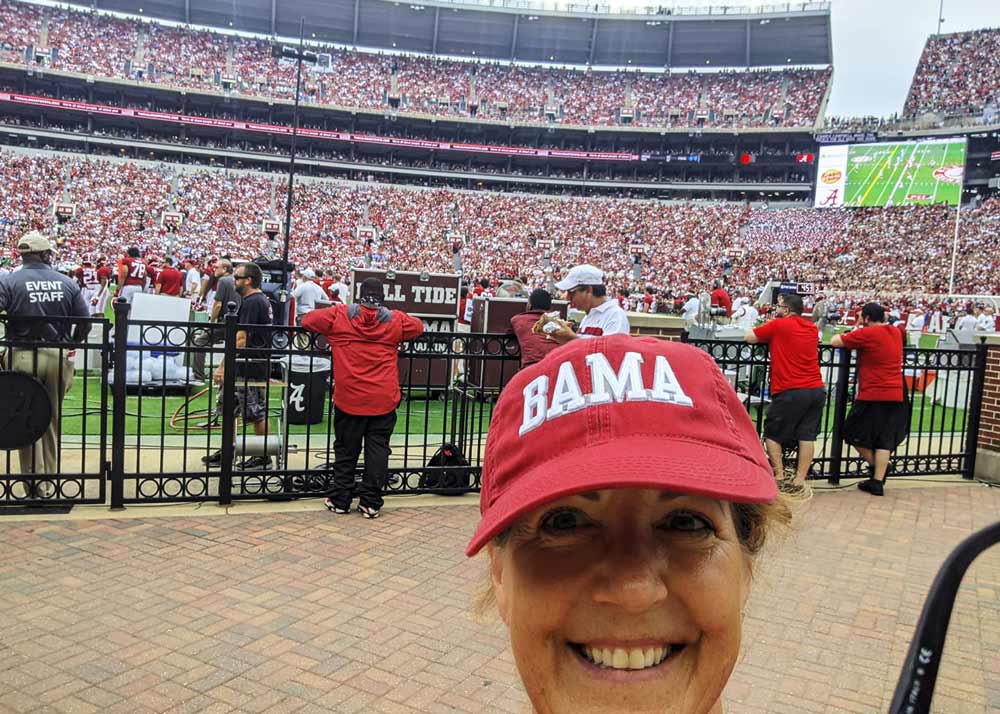 I was on a road trip last week and out-of-my-way home, I planned a stop at University of Alabama. I always aim for the bookstore since that usually puts me in the center of campus.

It was a Saturday, and I knew the Crimson Tide were playing at home – I was told game time was 8:00 pm.

When I set out that morning, Google said I would arrive at the bookstore at 11:30 am.

But since the fun is in the journey, I stopped at lots of places along the way.

I experienced new things (a bean shucker!) and met amazing people (Rosemary at Sweet South Market!) plus the cotton fields in Alabama (in full bloom!), which always take my breath away.

The parking attendant, who happened to have graduated from Northwestern University (he saw my Illinois license plate), allowed me to park in the loading zone for twenty minutes. Literally, right in front of the bookstore.

Once inside, I heard the announcement: ‘Bookstore will be closing in 5 minutes.’ Five minutes?! I had checked on that too…it was supposed to be open until 6:00 pm.

“Not today. We always close 30 minutes before game time.”

The woman who told me game time was 8:00 pm was clearly mistaken.

Without that “mistake” I would not have enjoyed my journey…I would have stressed to make it to the bookstore before it closed. No doubt I would have missed the bean shucker and Rosemary and would have skipped all my photos in the cotton fields.

Instead, I arrived in perfect timing.

I was back in my car at 2:15 and realized I’m sooooooo close to the notorious Crimson Tide. On a spectacular Saturday afternoon.

I wanted to go to the game.

I ended up with free, rock star parking, within walking distance. I was wearing the Alabama gear I just bought in the bookstore. I was ready.

When I got to the stadium, I stood by a security checkpoint, and they ushered me in. I told the security person I just really wanted to see the inside the stadium.

“The game is sold-out so I can’t let you in, but you’re welcome to walk the perimeter.”

Still determined to get inside I walked into an entrance where I could see the players on the field – 20 yards away! I offered that security woman both of my shoes if I could just walk to the opening and see it.

“I can’t let you do that. Do you know how many people today have tried?”

I kept walking the perimeter.

When I saw a very official-looking security person (he was directing his worker-bees and telling them who could take breaks and when), I remarked that he looked so official (with a big smile on my face). And then I told him I just wanted to see inside the stadium.

He said okay – just go over there. “Over there” was where the student ticket-takers were taking tickets. So, I did.

I went over there and told the student ticket-taker that HE (pointing to the official-looking man) said I could go in. She shrugged her shoulders and said OK.

And just like that, I was in the “Mother Ship” as the Northwestern grad called it. On a Saturday. During a sold-out game. Without a ticket.

Bottom line: It starts with setting your intention. What do you want? If you don’t know what you want, how will you ever know when you get it? Set your intention. Enjoy the journey and know that timing is always perfect.

How’s Your Mind-reading Ability? (That’s what I thought…) →
Manage Cookie Consent
To provide the best experiences, we use technologies like cookies to store and/or access device information. Consenting to these technologies will allow us to process data such as browsing behavior or unique IDs on this site. Not consenting or withdrawing consent, may adversely affect certain features and functions.
Manage options Manage services Manage vendors Read more about these purposes
View preferences
{title} {title} {title}